Over millions of years and volcanic upheavals, the organic leftovers of coral heads, which had been originally a gift from the seas, were covered by mud and ash, they were gradually replaced by mineral laden substances which eventually crystallized in mostly hexagonal (quartz) patterns in many different colours and sizes. We discovered this fossilized or petrified (from the Greek Petra, meaning rock) coral as part of a geological formation, known as the “Antigua Formation” (according to Harvard University), between 13 and 34 million years old. 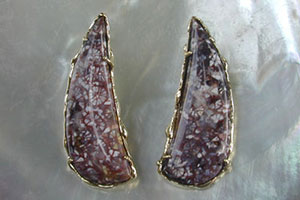 We have learned how to cut it, carefully slicing off its brown protective coating of iron oxide and exposing its hidden beauty with all its different patterns. We now grind and polish it into beautiful gemstones which we set into our unique silver and gold jewellery, designed and made and exclusively available at The Goldsmitty.

We invite you “to own a piece of our rock” as a memento of your visit to our lovely island.

We are proud to introduce: “Antiguanite!”